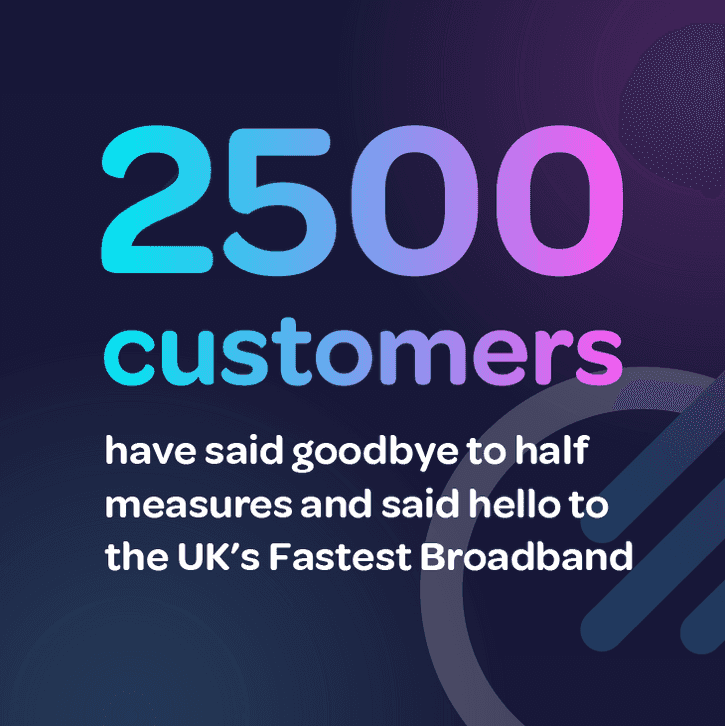 YouFibre, has just connected its 2,500th customer. The ISP achieved 1,000 customer connections within its first year of operating and since starting work in more towns across the UK, it has more than doubled its first year’s connections in the two months up to October 2021.

Customers who have signed up so far have commented that with their previous broadband suppliers, including BT, Plusnet, Sky and Virgin, they were simply unable to work from home easily and reliably; even gaming, watching content on streaming platforms and other online entertainment had been impossible or difficult. YouFibre’s consistent, symmetrical speeds, of up to 10 Gbps coupled with the reliability of full fibre and very low cost have eliminated these problems.

Ryan Battle, managing director of YouFibre, said: "Achieving this number of customers in such a short space of time is exceptional. The broadband industry has overcharged and underdelivered for too long, we have broken the mould by providing faster connections and a better service at lower prices. Everyone should have affordable access to fast internet, so a whole household can seamlessly work, live and play online.

“This approach has given us a real advantage and made YouFibre the most attractive internet service provider option for customers in the areas we currently work in. We’re taking our service to even more towns over the next year and will be announcing these shortly.”

YouFibre provides a range of broadband packages, including YouFibre 500, which offers speeds of up to 500 Mbps, at just £30 per month, with three months free, £10 cheaper than the equivalent Virgin Media package. YouFibre 500 offers people speeds around six times faster than the UK average of 80.2 Mbps. And YouFibre’s 1000 Mbps package, YouFibre 1000, comes with YouMesh, which ensures Wi-Fi coverage in every room, free of charge.

Speeds of around 500 and 1000 Mbps will ensure households and business broadband users will be able to do just about anything they want online no matter the time of day.

YouFibre customers will be able to stream in ultra-HD across multiple devices at once, download movies at speed, play video games, whilst video calling colleagues and friends all at the same time thanks to the faster speeds available through the new full fibre infrastructure.

Have yourself a multi-user Christmas: for broadband that’s nice, not naughty